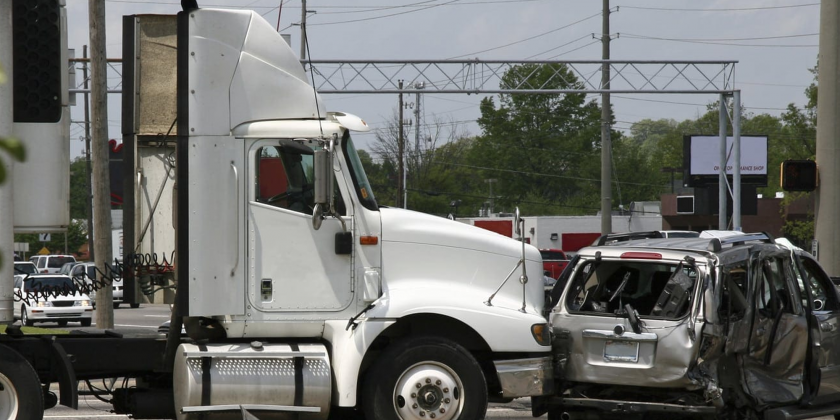 Accidents happen every day, but they’re not limited to passenger vehicles. We also share the roadways with a lot of commercial vehicles, which could be another car, a van, or often a much larger and heavier semi-truck or tractor-trailer. In fact, there are an estimated 120 million commercial vehicles in the United States, and the Federal Motor Carrier Safety Administration (FMCSA) reports that they were involved in approximately 415,000 crashes in 2015 involving them, resulting in over 3,850 fatalities.

Steps To Take In An Accident With A Commercial Truck

When two passenger vehicles collide, if both parties agree that the damage was minimal and there were no injuries, they can shake hands and part ways; not so when there’s an accident involving a commercial motor vehicle. You or the truck driver should contact law enforcement immediately following an accident.

Most commercial vehicles are larger and significantly heavier than passenger vehicles (an 18-wheeler may weigh as much as 30 times the amount of the vehicle it hits). As a result, injuries an be serious and even life-threatening. So, your priority is to take care of yourself or injured loved ones by assessing injuries and stabilizing them if needed. If first-responders on the scene recommend immediate trauma care, you should never refuse; they know best, and often following an accident you may be too dazed to realize the extent of your injuries.

Put your mobile phone to use and snap photos to document the scene. This will be helpful for insurance purposes, legal proceedings, and to help you remember the facts of what happened later on because details become hazy over time. Take pictures of any damage to the interior or exterior of your car, and any injuries you or your loved ones may have sustained. Then move on to the commercial vehicle to take photos of the license plate and any other identifying features, such as company logos. You’ll also want to get photos that show vehicle positioning, traffic signs, lane markings, skid marks, and any property damage.

With the photo-taking done, it’s time to collect as much information as possible. If you don’t have a pen and paper, make audio notes on your phone. These notes should include the exact time, road and weather conditions, and any other detail that you think may be helpful down the road so that it doesn’t go forgotten. You should also collect the names and contact information of any other motorists involved in the accident, including the truck driver, along with the names of any potential witnesses.

Get the Vehicle’s U.S. Department of Transportation (DOT) Number

Just like an airplane has a black box to record in-flight activity, many large commercial vehicles also have an event data recorder (EDR) to record the vehicle’s current or most recent speed, its average speed, the number of hours on the road, and even seatbelt usage. In order to access the EDR, your lawyer may need the vehicle’s DOT number. If the EDR reveals that the driver was speeding at the time of the accident or in violation of the Hours of Service (HOS) regulations, it can help prove negligence (HOS are set to ensure drivers do not spend too much time on the road, as fatigue is one of the leading causes of commercial vehicle accidents).

It’s not likely, but a commercial truck driver’s company may send a representative to the scene of the accident and ask you to sign documents. Unscrupulous companies may do this because often accident victims are not in their right mind, or still processing the events, and will agree to sign paperwork without reviewing it; ultimately, the paperwork tries to absolve the company of damages. So, never sign any paperwork from company agents.

You’ll likely receive a call from the driver’s insurance agency following the accident asking for your version of the incident. They may act like they are trying to help you, but in reality, they are simply trying to limit their liability. They may try to confuse you, twist your words, or get you to admit some wrongdoing, and the call may be recorded. Your best bet is to politely refuse to speak with them, and ask for their information (company name, adjuster’s name, contact information) and let them know you’ll get back with them later.

You’re also likely to receive calls from the company’s claims adjuster, also asking for details they will likely try to use against you (or ask you to sign paperwork that will absolve them of some amount of liability). As with the insurance company, it’s best to simply ask for their information and tell them you’ll return the call when you’re able. You can, however, ask to see the claim and any relevant information; they may be willing to email it to you.

Because an accident with a commercial vehicle differs from passenger vehicle accidents, it’s important to find an attorney that understands the regulations regarding commercial vehicles and knows who to go after to get you the compensation you deserve. A big concern for victims of trucking accidents is that evidence can “disappear” once the trucking company gets involved, so don’t leave your future or compensation to chance with an inexperienced or unknowledgeable attorney. Talk to the experts at Ibay Law Group today.